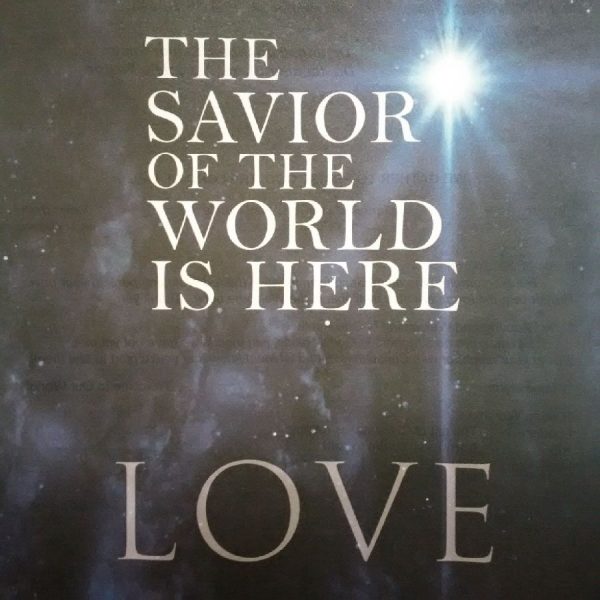 Dr. Jonathan Sloan gives a sermon about the the birth of our Savior, the incarnation of God, Love Personified: Jesus. He showed us the Way–>to Love and to be love.

*Call to Worship
The Gift of Christmas is a baby,
born to die for all!
During His life He is called many names,
but we know Him as love personified!
Jesus came to teach, to preach, to guide and to share, all while demonstrating the unending and overwhelming love of God!
Let us worship God!

*Prayer of Confession
Almighty God, we often lose sight of what we are called to do. We often wage war in the name of peace; we look to luck while searching for hope; we settle for temporary happiness when we truly want joy; we find hate when seeking love. Help us to recognize Your gift, the gift of Your Son, a child born to illuminate the world so that we may clearly see what our souls need and our hearts desire…

*Assurance of Pardon
A lowly babe carefully wrapped in swaddling cloths at birt is the Savior of the world, who sheds His burial clothes as He forgives our sins and lights our way to eternal life.
Thanks be to God!

Isaiah 9:2-7New Revised Standard Version (NRSV)
2 The people who walked in darkness
have seen a great light;
those who lived in a land of deep darkness—
on them light has shined.
3 You have multiplied the nation,
you have increased its joy;
they rejoice before you
as with joy at the harvest,
as people exult when dividing plunder.
4 For the yoke of their burden,
and the bar across their shoulders,
the rod of their oppressor,
you have broken as on the day of Midian.
5 For all the boots of the tramping warriors
and all the garments rolled in blood
shall be burned as fuel for the fire.
6 For a child has been born for us,
a son given to us;
authority rests upon his shoulders;
and he is named
Wonderful Counselor, Mighty God,
Everlasting Father, Prince of Peace.
7 His authority shall grow continually,
and there shall be endless peace
for the throne of David and his kingdom.
He will establish and uphold it
with justice and with righteousness
from this time onward and forevermore.
The zeal of the Lord of hosts will do this.

Luke 2:1-20New Revised Standard Version (NRSV)
The Birth of Jesus
2 In those days a decree went out from Emperor Augustus that all the world should be registered. 2 This was the first registration and was taken while Quirinius was governor of Syria. 3 All went to their own towns to be registered. 4 Joseph also went from the town of Nazareth in Galilee to Judea, to the city of David called Bethlehem, because he was descended from the house and family of David. 5 He went to be registered with Mary, to whom he was engaged and who was expecting a child. 6 While they were there, the time came for her to deliver her child. 7 And she gave birth to her firstborn son and wrapped him in bands of cloth, and laid him in a manger, because there was no place for them in the inn.

The Shepherds and the Angels
8 In that region there were shepherds living in the fields, keeping watch over their flock by night. 9 Then an angel of the Lord stood before them, and the glory of the Lord shone around them, and they were terrified. 10 But the angel said to them, “Do not be afraid; for see—I am bringing you good news of great joy for all the people: 11 to you is born this day in the city of David a Savior, who is the Messiah, the Lord. 12 This will be a sign for you: you will find a child wrapped in bands of cloth and lying in a manger.” 13 And suddenly there was with the angel a multitude of the heavenly host, praising God and saying,

14 “Glory to God in the highest heaven,
and on earth peace among those whom he favors!”

15 When the angels had left them and gone into heaven, the shepherds said to one another, “Let us go now to Bethlehem and see this thing that has taken place, which the Lord has made known to us.” 16 So they went with haste and found Mary and Joseph, and the child lying in the manger. 17 When they saw this, they made known what had been told them about this child; 18 and all who heard it were amazed at what the shepherds told them. 19 But Mary treasured all these words and pondered them in her heart. 20 The shepherds returned, glorifying and praising God for all they had heard and seen, as it had been told them.