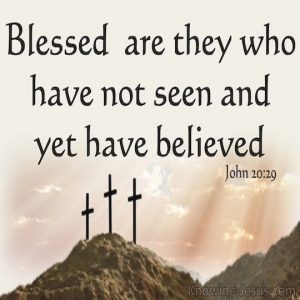 Seeing Does Not Always Equal Believing

WE GATHER TO PRAISE GOD, THE LORD OF LIFE

News of the Church

*The Greeting and Welcoming of One Another
(There are no strangers in God’s House, just friends we have not yet met.
Greet your neighbor with Christian love and let them know that you’re glad to see them!)

*Hymn “Because He Lives”

*Call to Worship
Leader: Did you witness the miracles of healing Jesus performed?
People: I believe through the witness of those cured!
Leader: Did you sit with the crowd who were fed by a few fish and loaves?
People: I believe through the testimony of those satisfied!
Leader: We did not see the empty tomb, but we see the works of Christ in our
lives today. Blessed are those who rest on faith alone!
ALL: Let us worship God!

*Prayer of Confession (Unison)
Dear Lord, we turn to various media sources and are taken in by stories based on fear and hatred; but too often are skeptical of Your work of love in the world. We heartily listen to gossip and believe the worst in people; but shake our heads in disbelief at those who claim to work in Your name. We are surrounded by digital technology that can create fear and chaos based on made-up evil; but we forget the true Creator so we panic and lose hope. Help us to remember that what we see with the eyes of our heart, through faith in Your promises, is real. Help us to realize that it is only in closing our eyes and opening our hearts that we can clearly see … (Silent time of prayer)

*Assurance of Pardon
Leader: We were not there when Jesus suffered and died for our sins. We were not
there when He rose, showering us with His grace and forgiveness; but He is
here, in our times of joy and sorrow. His mercy is with us until the end of
time.
ALL: Thanks be to God!

*The Gloria Patri – Hymn Tune, 581
Glory be to the Father, and to the Son, and to the Holy Ghost;
As it was in the beginning, is now, and ever shall be, world without end. Amen.

WE RESPOND TO GOD’S WORD

Prayers of the People and The Lord’s Prayer (Unison)
Our Father who art in heaven, hallowed be thy name. Thy kingdom come,
thy will be done, on earth as it is in heaven. Give us this day our daily
bread; and forgive us our debts as we forgive our debtors; and lead us not
into temptation, but deliver us from evil. For thine is the kingdom and the
power and the glory, forever. Amen.

WE GO FORTH TO SERVE

Jesus Appears to the Disciples
19 When it was evening on that day, the first day of the week, and the doors of the house where the disciples had met were locked for fear of the Jews, Jesus came and stood among them and said, “Peace be with you.” 20 After he said this, he showed them his hands and his side. Then the disciples rejoiced when they saw the Lord. 21 Jesus said to them again, “Peace be with you. As the Father has sent me, so I send you.” 22 When he had said this, he breathed on them and said to them, “Receive the Holy Spirit. 23 If you forgive the sins of any, they are forgiven them; if you retain the sins of any, they are retained.”

Jesus and Thomas
24 But Thomas (who was called the Twin), one of the twelve, was not with them when Jesus came. 25 So the other disciples told him, “We have seen the Lord.” But he said to them, “Unless I see the mark of the nails in his hands, and put my finger in the mark of the nails and my hand in his side, I will not believe.”

26 A week later his disciples were again in the house, and Thomas was with them. Although the doors were shut, Jesus came and stood among them and said, “Peace be with you.” 27 Then he said to Thomas, “Put your finger here and see my hands. Reach out your hand and put it in my side. Do not doubt but believe.” 28 Thomas answered him, “My Lord and my God!” 29 Jesus said to him, “Have you believed because you have seen me? Blessed are those who have not seen and yet have come to believe.”

The Purpose of This Book
30 Now Jesus did many other signs in the presence of his disciples, which are not written in this book. 31 But these are written so that you may come to believe that Jesus is the Messiah, the Son of God, and that through believing you may have life in his name.The Resurrection of Jesus
16 When the sabbath was over, Mary Magdalene, and Mary the mother of James, and Salome bought spices, so that they might go and anoint him. 2 And very early on the first day of the week, when the sun had risen, they went to the tomb. 3 They had been saying to one another, “Who will roll away the stone for us from the entrance to the tomb?” 4 When they looked up, they saw that the stone, which was very large, had already been rolled back. 5 As they entered the tomb, they saw a young man, dressed in a white robe, sitting on the right side; and they were alarmed. 6 But he said to them, “Do not be alarmed; you are looking for Jesus of Nazareth, who was crucified. He has been raised; he is not here. Look, there is the place they laid him. 7 But go, tell his disciples and Peter that he is going ahead of you to Galilee; there you will see him, just as he told you.” 8 So they went out and fled from the tomb, for terror and amazement had seized them; and they said nothing to anyone, for they were afraid.