Pastor’s Manna – But then… 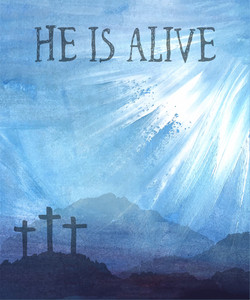 Just a week ago, on Easter Sunday, we celebrated the Resurrection of Jesus Christ. This was quite literally a triumph over evil, a victory over death, a defeat of sin.

For the disciples, it changed everything. Their teacher and leader had been killed. They had been hiding behind doors, fearful of the authorities. It seemed as if all was lost. …

But then, the stone was rolled away

But then, the women went to the tomb

But then, the disciples raced to the tomb

But then, the gardener spoke to Mary

But then, the angel asked, “Why do you seek the living among the dead?”

Really, Our faith story is a series of “but then’s”

We were in perfect relationship with God.

BUT THEN we eat forbidden fruit in the Garden of Eden.

We were following God

BUT THEN we fell away….

BUT THEN he sent judges and prophets to remind us…

BUT THEN we turned it around…

Each time, the change meant failure. We were in a good place, BUT THEN we lost it.

Only Jesus could change that relationship

Only Jesus could change it to:

We were lost BUT then we were found

We were dead BUT now we live!

What is your story? What were you, and what will you become through the love and grace of